When you are purchasing a business or a piece of commercial real estate, you will almost always start off with a Letter of Intent.

What is a Letter of Intent?

Such a letter sets out the basic economics of the transaction – what is being sold (assets or stock?) and for how much, payable when and how. Some other key terms are usually set out in simple terms -- e.g., assumption of liabilities or not, non-competes for key personnel, and a closing date. The Letter of Intent lets each side know that it is worth the time, energy and expense of doing “due diligence” and having a formal contract drafted.

Clients always rightly want to know if the Letter of Intent will be binding or not. The short answer is that for the most part, they will not be binding – for the simple reason that it is usually in the interest of both parties to check out (perform “due diligence”) the other side to make sure they can get what they want out of the deal before committing themselves legally to the transaction. So, there will usually be a provision that says that the Letter of Intent is not binding on either party until a formal contract is signed.

However, there are two areas that most Letters of Intent expressly provide are binding on the parties – and binding as soon as the Letter of Intent is signed. First is an agreement not to disclose the confidential information from the other party, and there is usually an extended definition of what is, and what is not, confidential. Second, there may be an agreement (usually by the Seller) to deal exclusively with the Buyer for some period of time. This is to allow time to reach an agreement without having the rug pulled out by the other side’s trolling for better deals with others.

There may also be circumstances where one or both sides may have good reason to make a Letter of Intent binding. This should not be done lightly, however, and the Letter of Intent may be written so as to provide an “escape clause” under certain conditions.

The most important things are to clearly state each side’s expectations and assumptions going into the deal and to make an intelligent and transparent choice regarding which terms, if any, of the Letter of Intent will be binding.
Posted by Rich Rosenthal Brincefield Manitta Dzubin & Kroeger, LLP at 6:59 PM No comments: 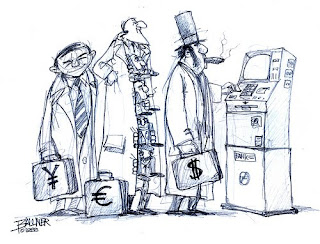 When most people think about “money laundering” – the movement of illicit funds for the purpose of concealing the true source, ownership or use -- they naturally associate it with organized criminal syndicates like drug cartels, the Mafia, mobsters, or violent gangs. According to law enforcement,

"Through money laundering, the monetary proceeds derived from criminal activity are transformed into funds with an apparently legal source. Money laundering provides the fuel for drug dealers, terrorists, arms dealers and other criminals to operate and expand their enterprises. We know that criminals manipulate financial systems in the United States and abroad to further a wide range of illicit activities."

Yet, to an ever-increasing extent, ordinary tax-paying, crosswalk-crossing citizens find themselves among those caught in the net meant to snare these more traditional targets of federal criminal investigations.

Take the recent case of Gus and Greta Mueller (names, places, etc., have been changed). Gus worked for years as an IT specialist at a local hospital. With the help of their two adult sons, both patent attorneys, they recently purchased their dream home in Annandale. In order to make the deal work, they needed some extra money for the down payment. Unbeknown to Gus, Greta, a traditional stay-at-home mom, had been saving up portions of the “cookie money” that Gus gave her for household expenses each payday in a secret stash. After forty years, it added up to many thousands of dollars, just enough to make their dream home affordable.

Nice story, isn’t it? Well, it has a scary ending. When Greta told the mortgage broker about the extra cash, the broker advised Greta that if she deposited more than ten thousand dollars at one time, it would be reported to IRS and they would face extra scrutiny from the taxman. So, Greta only deposited $9,900 at a time. Big mistake, since Big Brother, in the form of a federal organized crime task force, was watching.

You see, in order to keep track of potential money laundering operations, the federal government requires banks and other financial institutions and commercial actors to report any transaction involving more than ten thousand dollars in cash or cash equivalents (e.g., cashier’s checks, money orders). And, to prevent mobsters from evading detection of large cash transactions by, say, breaking up $15,000 in cash into three segments and depositing each one in a different bank or branch office, the feds invented a type of money laundering crime called “structuring.”

Bank employees are routinely warned to be on the lookout for structuring transactions that might be for the purpose of avoiding these federal recordkeeping or reporting requirements. If they spot activity that might constitute structuring, they are required to send a Suspicious Activity Report (SAR) to the feds. Here is the content of a typical banking notice regarding structuring:

"Likewise, it is illegal for you or your employees to assist anyone in structuring transactions in order to avoid recordkeeping or reporting requirements. For example, you may not tell or even imply to a customer that they can avoid providing information by conducting a smaller transaction. Some criminals may attempt to trick you or your employees into allowing them to structure transactions by splitting up transactions with several accomplices or by trying to 'con' you with a hard luck story. You need to be on the lookout for structuring so that you can prevent it from occurring."

So . . . Gus and Greta’s bank, noticing a series of deposits just under the ten thousand dollar threshold, sent a SAR about them to feds and the task force swooped in. Without any advance warning to Gus and Greta -- and absent the slightest evidence of any underlying criminal activity as the source of the funds – the task force obtained a seizure order from a federal magistrate and confiscated over twenty thousand dollars from Gus and Greta’s bank account. They then visited Gus at his workplace and interrogated him (and later Greta) about these suspicious transactions.

Fortunately, Gus and Greta had the sense and the resources to hire a lawyer with some experience in this area. Ultimately, no criminal charges were brought and much of the seized funds were eventually returned. But the task force got its pound of flesh, Gus and Greta had the scare of a lifetime, thousands of dollars in legal fees were expended, and a great deal of investigative time and effort – time and effort that could have been far better spent chasing actual money launderers with real illicit funds – was wasted treating Gus and Greta like gangsters.
Posted by Rich Rosenthal Brincefield Manitta Dzubin & Kroeger, LLP at 1:13 PM No comments: